Opening the unit will void the warranty. Any attempt to perform this modification without the required skills or without following all given precautions can easily damage the unit beyond repair. I cannot be held responsible for any damage. You do this at your own risk. 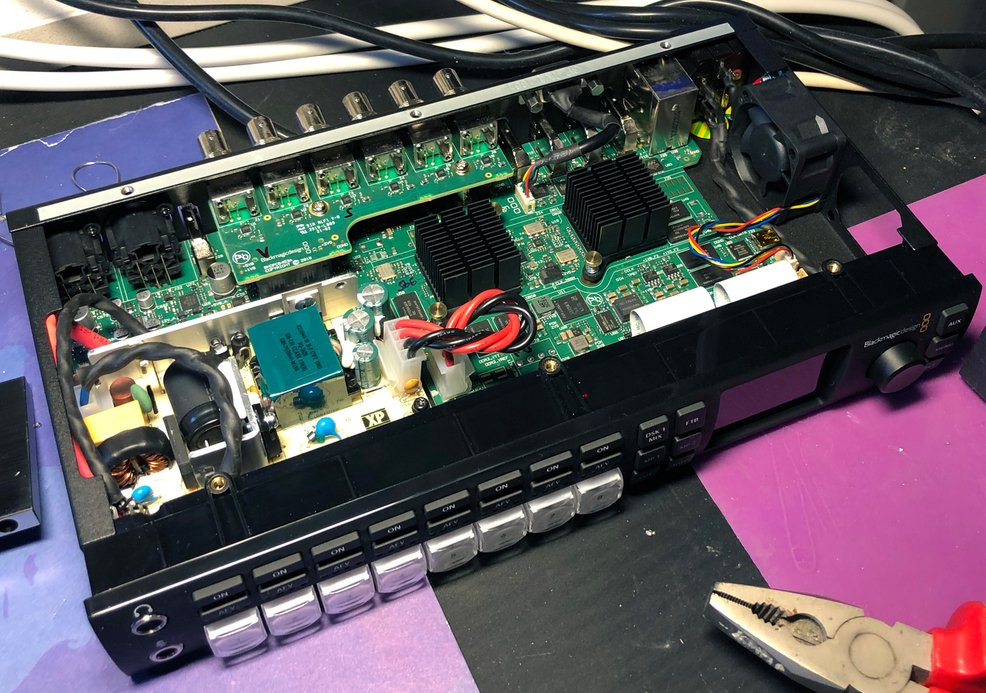 The unit is fairly silent, but after a while, the unit heats up and the fans will run at full throttle. The noise becomes unpleasant, at least for my ears. This is not a big problem if the unit is stowed away inside a rack or placed in a remote location, but if you work in close proximity then the noise probably will bother you, sooner or later.

I found at least another unhappy user - with a silencing solution:

This idea probably works, but I cannot directly recommend it - you risk some serious things:

Frankly speaking, the original thermal design of this unit is poor. The design seems to go back a couple of years, my recently purchased unit (May/2020), is already manufactured in 2016. It seems that the design has been static since the introduction, or then BM is selling old stock...

The heavy number-crunching task (video processing) is taken care of by two power-hungry Xilinx FPGA's, hiding under the finned heatsinks on the main PCB, see Fig.1. These dissipate the majority of the heat inside the unit. Their cooling relies solely on the fact that enough cool air is pushed through the fins via the rather small heatsinks. To make the flow as efficient as possible, there is an airflow controlling (plastic) viaduct mounted to the lid, see Fig.2.

The original (speed-controlled) 40mm fans are noisy, even at the lowest speeds. Unfortunately, due to the under-dimensioned heatsinks, the fans need to (and will) run in practice at full speed. This generates an unpleasant and constantly disturbing noise. Don't even dream of performing a voiceover, or recording other faint sounds close to this unit.

The electrical wires, and their order, are the same. But beware - the colours of the wires are different. Since the Noctua fans come with another type of connector, you need to cut these away and reuse the connectors from the removed fans. Since it is practically impossible to rewire the old connectors, cut them from the old fans, and leave an inch or two of the original wires. See Fig.3 as an example of proper wiring. Make sure to solder properly all wires before shirking the heat-shrink tubes. Table.1 has the colours and wire functions listed (only valid for the listed Noctua fan):

My initial test was performed with two Noctua fans, but types without the PWM speed control (just happened to have two of them). Such fans always run at full speed. Unfortunately, even these very silent fans produced quite loud noise at full speed, but the noise was more pleasant. The air exhaust ports in the top lid consist of small holes that make the exhaust air very turbulent. This produces additional noise. You can hear the difference by placing the lid temporarily in place. To drill open these air holes is not an option.

After replacing the fans with the correct type Noctua PWM fans (see Fig.4,  Fig.5 shows the fans after installation) the unit was initially extremely quiet. But even these new fans run at full speed when the unit heats up. The video mixer adjusts the fan speeds according to the FPGA temperature(s), and the new fans have similar flow rates as the old ones. Something else had to be done.

Both the bottom and top covers are made of painted aluminium. Since aluminium is a good heat conductor it was obvious that conducting as much heat as possible from the FPGA's to the chassis - without removing the original air-cooling - was something to test.

This requires that you take apart the whole unit, mechanically modify some parts, and then put it back again. This procedure took me many hours, doing it carefully one step at a time. I hope these instructions get you up to speed if you decide to perform the modification yourself. 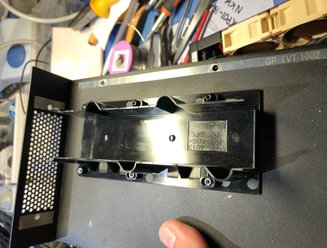 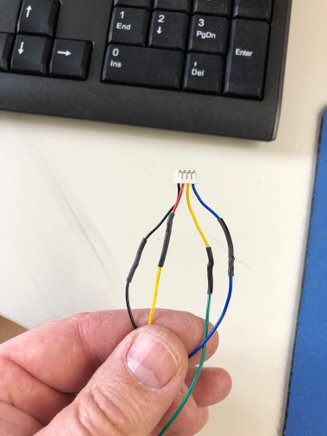 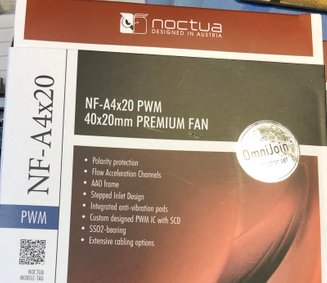 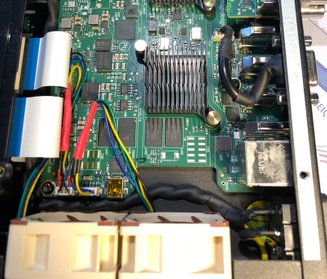 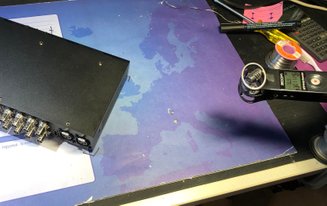 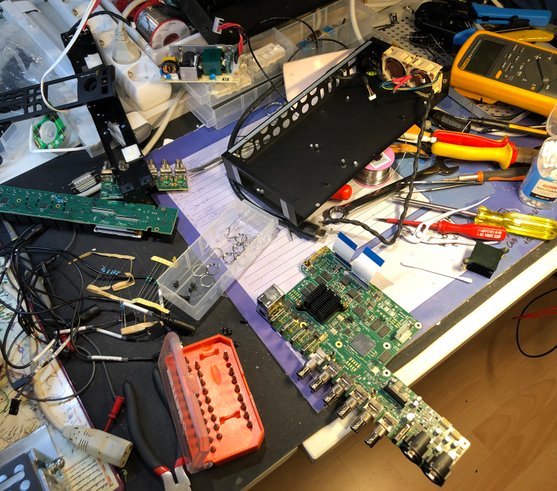 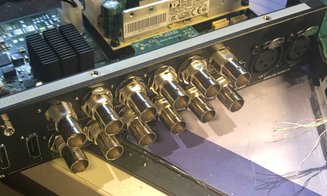 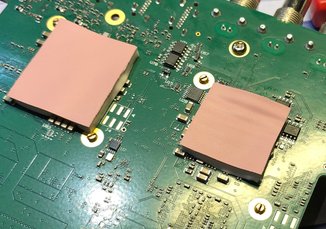 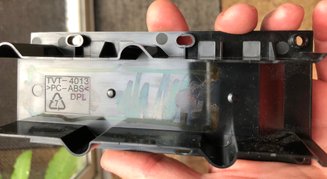 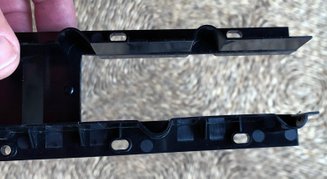 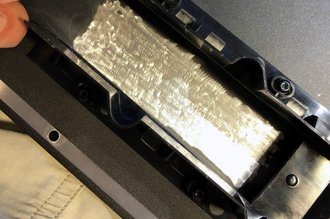 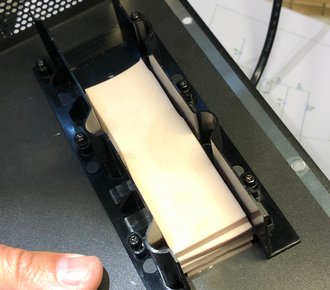 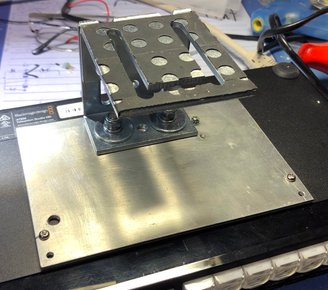 Fig.16 External fixing plate and standoff. This plate has a double function in my system. The aluminium plate acts as a heatsink (yes - there is thermal paste between it ant the unit bottom), but also as a convenient standoff to elevate the unit about 10cm above the table surface. 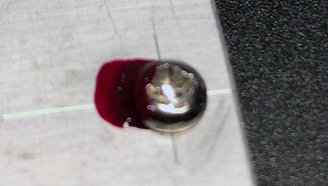 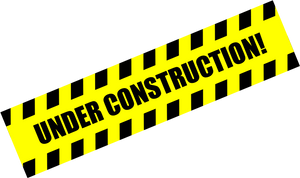